Home » Mythology » You are reading »

Are Mythologies Fictional and Rituals Irrational?

Mythology is not invented; they are found.  You can no more tell us what your dream is going to be tonight than you can invent a myth. Myths come from essential experience (Joseph Campbell).

We live in a world of scientific and technical advancement where logic, reason, and rationality are the driving forces. In such a world, how do we justify our belief in mythology and rituals?

The characters from mythologies are indeed fictional.  While the characters might be fictional, the vital issues illustrated in the stories are not.  The moral and ethical dilemma, the good versus the bad, sacrifice versus selfishness and the righteous way to deal with these issues evolved from real-life experiences of our ancestors.  The stories are about our ancestors’ search for meaning in life and their quest to comprehend the eternal and the mysterious.

If mythologies are truly about the life of our ancestors, why did they not declare them as their own life stories?  Why did they masquerade them as stories of gods and goddesses?  Even more puzzling, why did they interleave their biographies within a religion?  Perhaps because our ancestors believed that if they declared them as their personal stories, they would not be received with the same respect and recognition as stories of mythological gods and goddesses would.  Worse, they would be ignored as stories from the past with no relevance to the current day’s life.  And, posterity would lose the benefits from an invaluable moral framework.

Assuming mythologies are indeed biographies of our ancestors, what role do rituals play within this scheme of things?  The rituals contribute to idealizing the mythical heroes and in creating an aura of power about them.  As Joseph Campbell says, “Rituals invoke the power in the beliefs.”  One of the reasons why many other professions also require their members to conform to certain rituals.  For example, a judge must wear a black robe to court, a doctor, a white coat to hospital.  If a judge fails to wear a black coat or if a doctor fails to wear a white coat, would it undermine their ability to perform their roles as a judge or as a doctor?  No, they would continue to possess their knowledge and expertise and they would continue to execute their responsibilities diligently.  But, the ritual – wearing a black or a white coat – formalizes their role as a judge or a doctor.  The attire generates an appearance of legitimacy and respect about them in the minds of their onlookers.  Similarly, in the context of religions, the rituals create a feeling of divinity and devotion about the mythical gods.  And, in turn, it helps in keeping the myths alive.

Mythologies are just stories of our ancestors. They are moral and spiritual frameworks that evolved from their life experiences.  When we discard mythologies as fictional and rituals as irrational, we lose a valuable framework that guides our lives.  And, worse, we have no substitute to replace them. 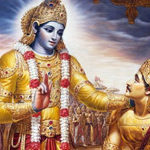 Is Gita a story of War?